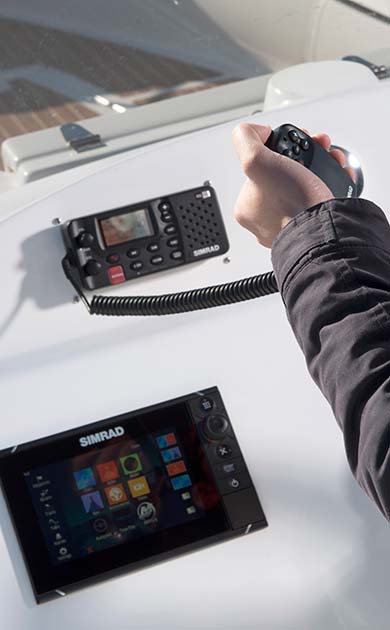 VHF: How to get
the best out of your radio

VHF – How to
get the best
out of your
radio

One of the key communication tools aboard any vessel is the VHF radio. Kevin Soole and Leigh Armstrong explain why and provide tips on how to get the best out of your radio.

Our mobile phones provide more methods of communication than we could ever have imagined. From voice calls to video, text to tracking, staying in touch has become widespread big business. The knock-on effect in the marine world has been huge too, with cellular and satellite communications also playing their part in the way that we communicate at sea.

By comparison, conventional marine radio communications appear to have changed little during this time, tempting one to ask whether radios are still even necessary, especially aboard leisure craft when mobile phones are so handy and effective.

But the reality is that radio is still an important communication device. VHF (Very High Frequency) is the most commonly used system and has evolved during this period with a variety of new functions making it an easier, clearer and an even more dependable form of communication.

Safety is also a very important feature as Channel 16 remains the global emergency VHF channel and provides an immediate, proven and reliable means of both issuing a distress and managing the rescue response when in range of other receivers. To appreciate the true value of VHF radios and to understand how to get the best out of them, it is worth understanding some of the fundamental features of the VHF system.

One of the key factors to consider is range. VHF is limited by line of sight. In other words, the radio signal needs to have a clear, unobstructed path between the transmitter and the receiver to work. If either unit is behind a landmass such as a mountain or a hill, or below the curvature of the earth, the transmission may be blocked or weakened.

This means that it is relatively easy to estimate the potential maximum range of a VHF signal based on the relative positions of the transmitter and receiver antennae. Put simply, the higher the antennae are, the further they can see and therefore the greater the communication range.

The VHF radio’s range is determined by the sum of the two antenna heights and the curve of the earth. The higher the antenna is mounted on the vessel (‘B’ & ‘C’), the longer the VHF range.

The next fundamental aspect is the way in which communications are made in the Marine VHF band. There are three key methods – Simplex and Duplex (which send and receive standard voice communications) and DSC (Digital Selective Calling - which sends and receives digital communications.

Simplex transmits and receives on the same frequency and is generally used for ship to ship calls. Depending on atmospheric conditions, typically the range would be around 20 nautical miles.

The international safety channel 16 is simplex so that any vessel can hear and talk to any other vessel within range. 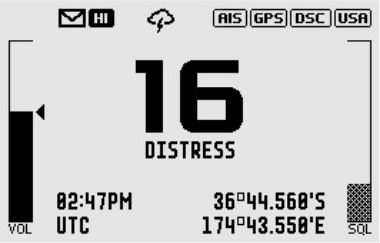 Simplex uses the same VHF frequency to transmit and receive on.

Transmits and receives on different frequencies and uses a shore based repeater station to relay transmissions in between. Because this is still a VHF frequency the limitations of line of sight transmissions still apply, but because the signals are going via a repeater station the possible range can be greater, potentially doubling the total maximum range up to around 40 nautical miles. 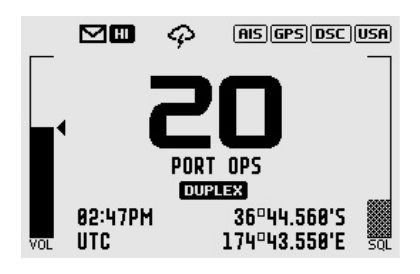 Duplex uses a different VHF frequency to transmit and receive on.

DSC uses VHF simplex and is therefore subject to the same range restrictions but has the added benefit that digital messages are sent. Broadly speaking this can be thought of in a similar way to a text message on a phone, but DSC has some additional and significant benefits.

These different transmissions methods can sometimes cause confusion, but as Kevin Soole explains, many of the common issues are easy to rectify. “One of the things that we hear a lot is that somebody has unknowingly set their radio on a duplex channel and while they can see a boat just a nautical mile away from them, they can’t hear them even though the other boat is also on the same channel. That’s usually because there is no repeater in range to relay the message on the other frequency.

“Here, the problem is that they don’t realise that they should be on a simplex channel rather than a duplex one. If they were, the frequency that they transmit and receive on would be the same for both boats.”

Avoiding this issue and understanding which channels are simplex and which are duplex is simple according to Leigh. “All of the channel selection charts are installed in our radios, so when you scroll through the channels a duplex channel will have a little duplex icon on the screen.”

The issue of channel selection is also important. While the frequency that is associated with a particular channel number is the same throughout the world, the range of channels that are available for use can vary depending on the country, as Kevin explains.

“What is legal in one country may not be in another. For example, pretty much every European country has their own set of channels which differ slightly from those used in say America or Canada.

“So, a radio must have the channels loaded for the country that it’s been used in. In some countries it may be illegal to use a particular channel because they’ve actually put that frequency aside for say the Coast Guard or commercial activities.

“And while it is easy to remember this if you’ve bought a new radio overseas to use back at home, it may not be so obvious if say the radio was installed on a boat that was imported from another country. In fact, it is not uncommon to find that there are only a handful of channels that will actually be legal to use in your country. So, it can become a legal issue.

“To help make it easier to know that you are operating legally, all of our current radios have a setup wizard which takes you through all of the critical things that need to be configured on the radio. And one of the very first items is where in the world are you. Additionally, channel charts are listed in the radio’s User Manual to help you select the correct channel to use, such as selecting a Simplex or Duplex channel. Also take note of the channel name – this will give you an idea of what that channel is mostly used for.”

Good VHF performance is also reliant on the installation of the antenna, as it can affect the quality of the radio as Leigh explains. “Having a radio with a poorly installed antenna is like having a fancy car with flat tyres. The car might be quick, but if the tyres are flat it’s not going to perform very well.

The antenna is probably the most important part of the installation. If you have a poor connection to your antenna or poor quality cable from your radio to antenna, then the performance will be affected.

It’s easy to underestimate the effect of power loss with a cheap coax antenna cable. “A common comment is that people say they can transmit, but that they are not being heard and assume that it’s a simplex or duplex problem. But often it is that they have a poor antenna installation. A high quality coax cable can make a big difference.”

The location of the antenna is also important as Kevin explains. “The higher the antenna the better as it effects the transmission and reception range. But it is also important to consider what other items may be obstructing the antennae. We had a case where an antenna was mounted on one side of the boat with a chimney stack in the middle. The shore base station that they wanted to communicate with could hear them going up the channel, but not hear them coming down the channel because the antenna was on the other side of the chimney stack.” Connections can also cause problems if they are not maintained correctly.