Famous lighthouses  around the world

Famous  lighthouses  around  the world

Lighthouses have long captured the imagination of boaters and the wider public. They attract curiosity regarding the buildings and the rugged individuals who crewed them with the purpose of saving countless lives from harm.

The advent of modern technology has seen most lighthouse keeper roles consigned to history and replaced by automated systems. In some cases, lighthouses have been decommissioned. Fortunately, many lighthouses remain as essential sentinels and a reassuring confirmation that your position on the electronic chart is correct when navigating close to the hazards they guard.

Join us as we travel around the world to visit this iconic collection of lighthouses. Viewed together, they remind of the inventiveness and skill of those who built and kept lighthouses in some of the most challenging locations around coasts and rocky outcrops.

This striking octagonal wooden structure is found on Eldred Rock, a small island in the Lynn Canal in southwestern Alaska, surrounded by stunning mountainous scenery. It is 17m tall with a range of 13nm.

First lit in 1906, it is the last of the 10 lighthouses constructed in Alaska after a series of deadly shipwrecks. Matters were exacerbated by the 1898 Gold Rush when the Lynn Canal was full of steamships bringing miners to Skagway for their climb over Chilkoot Pass.

The lighthouse was decommissioned in 1973 but is under restoration by the not-for-profit Eldred Rock Lighthouse Preservation Association, which one day hopes to open a visitor centre and museum on the island. 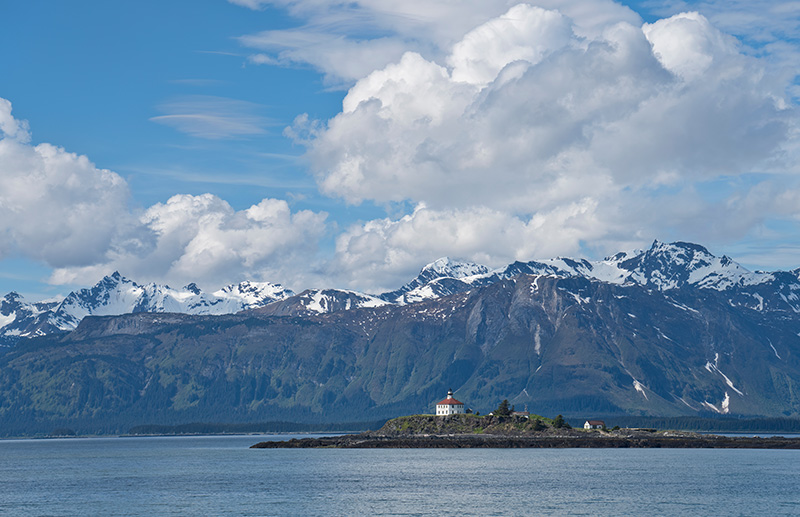 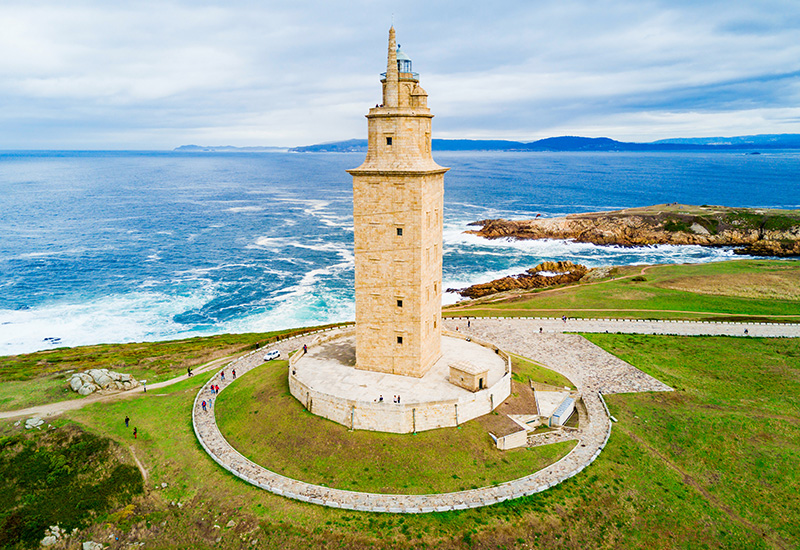 Located on a 57m rocky outcrop at the entrance of La Coruña Harbour in Galicia, Spain, the Tower of Hercules has been in use since the 1st Century. The lighthouse, as you see it today, comprises 34m of original Roman masonry, topped by another 21m applied in an 18th Century restoration sympathetically directed by architect Eustaquio Giannini. It is the only surviving navigation aid from the Roman era, recognised by its designation as a UNESCO World Heritage site in 2009.

Alongside the Tower of Hercules, you will find a small rectangular Roman building, a sculpture park, the Monte dos Bicos rock carvings from the Iron Age and a Muslim cemetery. The site also relates to many legends dating back to the Middle Ages through to the 19th Century. One myth suggests that Hercules slew the tyrant Geryon after three days and nights of battle. Whatever the truth, there is no doubting the incredible splendor of this still-functional lighthouse.

The current Tourlitis Lighthouse was built in the 1990s on a stone pillar rising from the Aegean Sea off the Greek port city of Andros. At first glance, the design seems like a scene from a fantasy movie with its staircase weaving around a sea-eroded rock base to the entrance. In terms of scale, this is also a small light, just 7m tall, with the rock boosting its focal height to 36m.

It mimics a 19th Century lighthouse that stood here destroyed by fighting in World War II. Tourlitis’s resurrection came about through a donation from the Goulandris family, who dedicated the new structure to their daughter, Violanda. It was the first Greek lighthouse to utilise automated operation, blending modern technology with mythical looks. 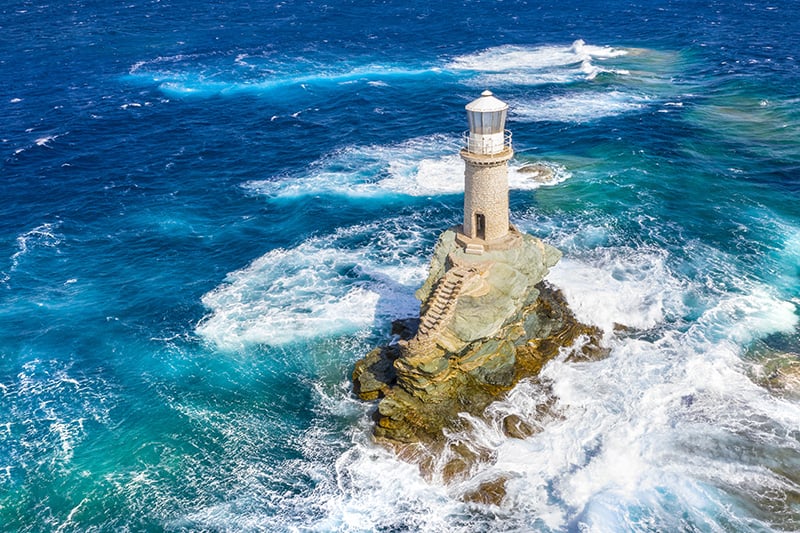 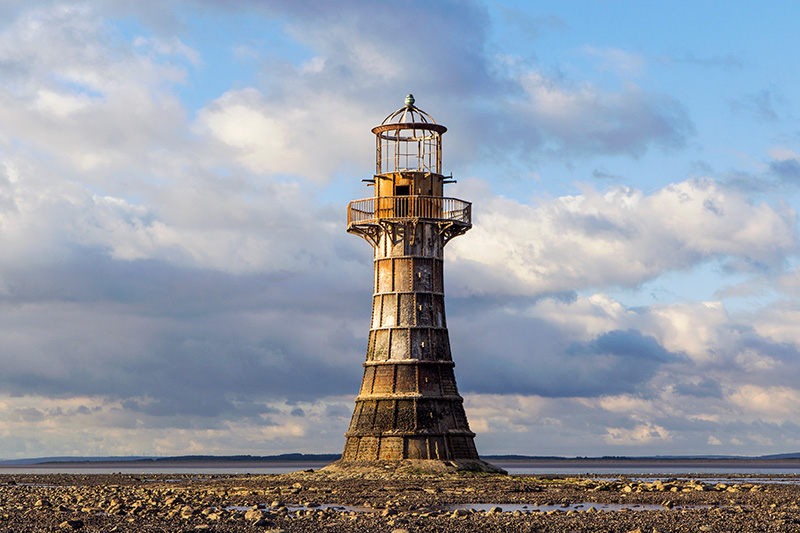 Constructed in 1865 off the Gower Penninsula in Wales, Whiteford Point is the only cast-iron lighthouse that is immersed at high tide. The plates are unusual because their flanges face outwards, giving the lighthouse its skeletal look.

Operational until 1933, the lighthouse signalled the location of Whiteford Point and the shallow waters in the vicinity which are hazardous to shipping. At high tide, it sits in over 6m of water.

During World War II, this unique structure served as a target for bombing practice but fortunately survived all attempts to destroy it. These days the interior is partially filled with rock ballast and the external access ladder is long gone. Little remains of its once elegant copper sheathed dome, but Whiteford Point continues its lonely vigil, a testament to the Victorian engineers who constructed it.

Initially built by the Venetians in the 16th Century, Chania Lighthouse stands opposite the Firkas fortress as a part of the fortifications for the old port of Chania. A chain was raised between the two landmarks to close the harbour.

The lighthouse fell into disrepair during the Turkish occupation of Crete before being rebuilt in the style of a minaret between 1824-1832. The base is the only element that remains of the original.

Earthquakes and World War II bombings saw Chania Lighthouse take on a distinct lean during the 20th Century, but it now looks as good as new after renovations in 2005.

This dominant mark overlooks Chania from its location on the end of the harbour mole. The lamp house still shines a light out to a range of 7nm. Closer too, you are more likely to notice the striking architecture of the tower itself, highlighted by illuminations at night. 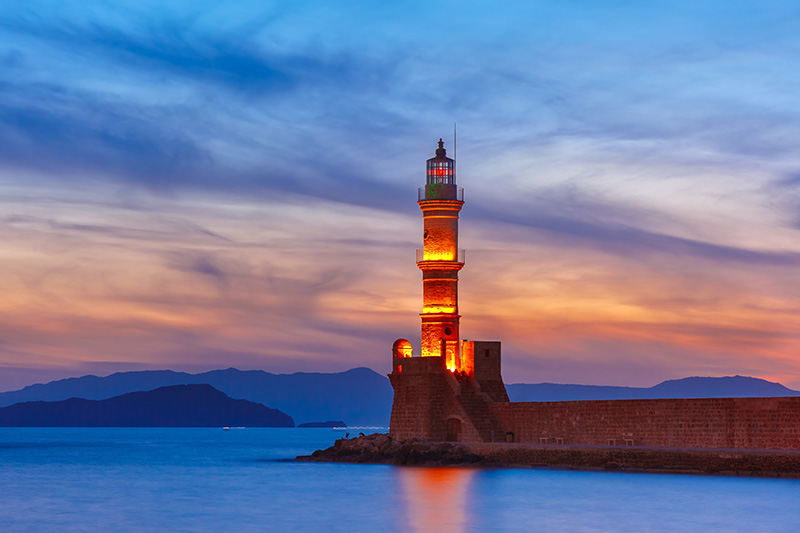 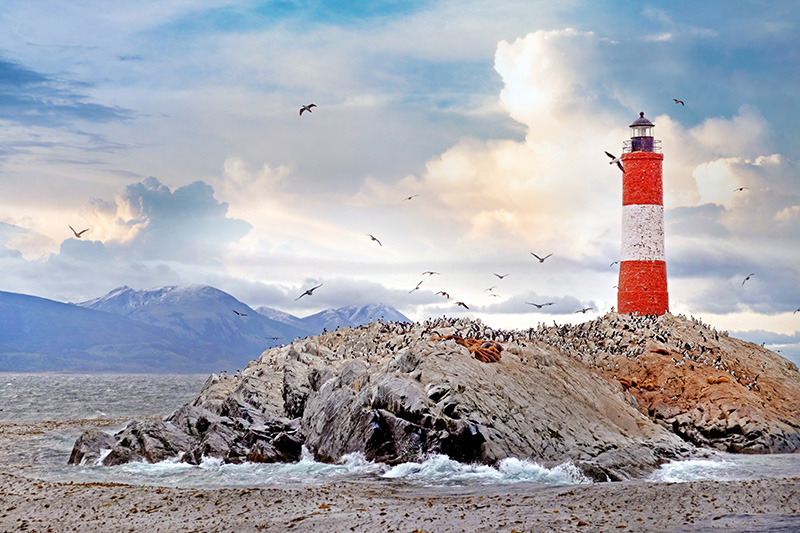 The Les Eclaireurs Lighthouse is the last significant artificial feature many seafarers see if travelling to the Antarctic, thanks to its location in the Beagle Channel on the Les Eclaireurs Islands at the extreme southern tip of Argentina. Standing 11m high, its traditional red and white lighthouse bands contrast well with the snowy peaks of the Tierra del Fuego mountain range.

This famous mark is often termed ‘The Lighthouse at the End of The World as a mistaken reference to Jukes Verne’s book of the same name. The author was actually referencing San Juan de Salvamento lighthouse, further to the east on the exposed Isla de Los Estados, which predated the Les Eclaireurs Lighthouse but crumbled out of use by the early 20th Century.

The conical brick structure of the Les Eclaireurs Lighthouse has fared much better and celebrated its centenary in 2020. These days the light is automated, powered by solar energy and even features on the itinerary of more adventurous tourists.

Located 6nm offshore off Eastbourne in the English Channel and built by Trinity House in 1971, the extraordinary Royal Sovereign Lighthouse replaced the light vessels which had previously marked the dangerous Royal Sovereign shoal since 1875.

This lighthouse’s design looks improbably, with a cylindrical column supporting an offset upper platform and helicopter pad. The column features a telescopic section which jacked up the platform during construction. The tower has an overall height of 36m and features a rotating three-panel 375mm catadioptric (refractive and reflective) lens for its tungsten halogen light.

Roveral Sovereign was crewed until 1994 by three keepers, then remotely controlled from Harwich on the UK east coast. It reached the end of its 50-year planned lifespan in 2022 and is due to be decommissioned and demolished. It will be replaced by improved local buoyage and an upgraded Beachy Head Lighthouse. So catch it  while you can. 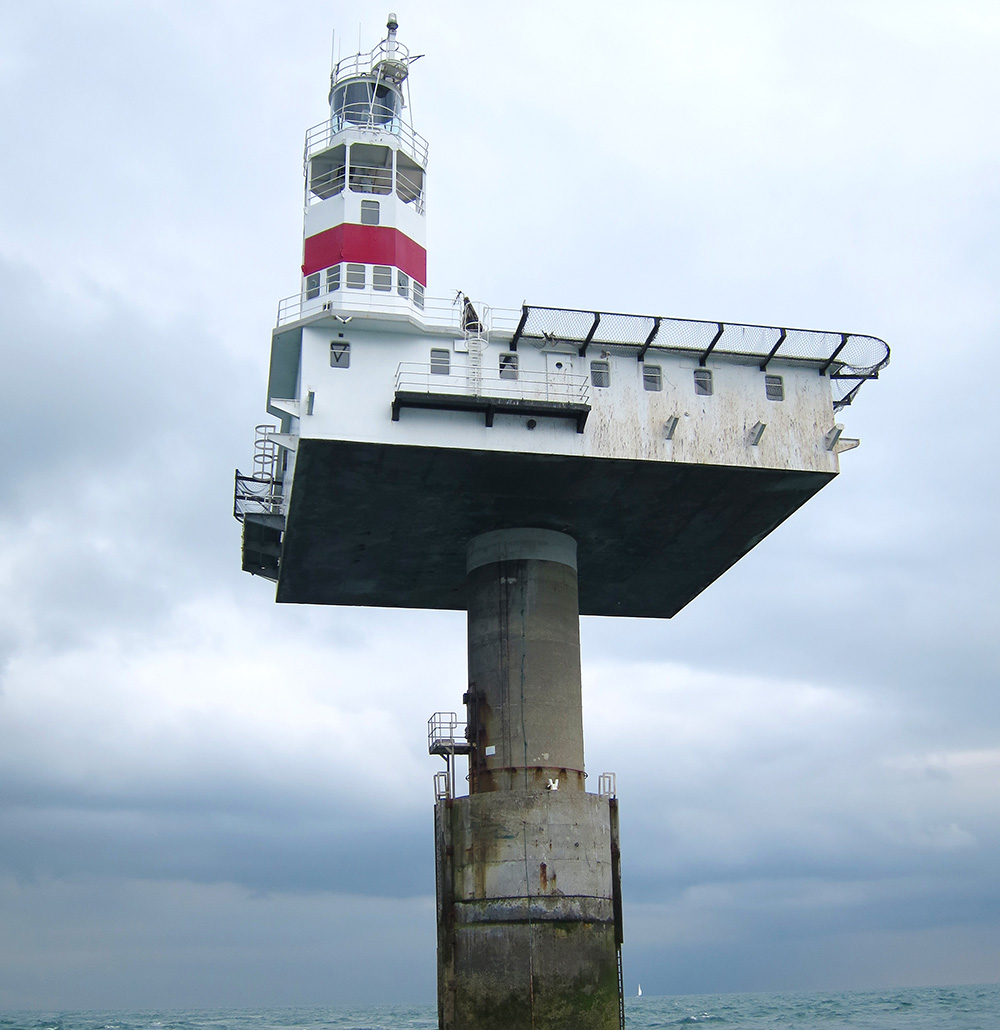 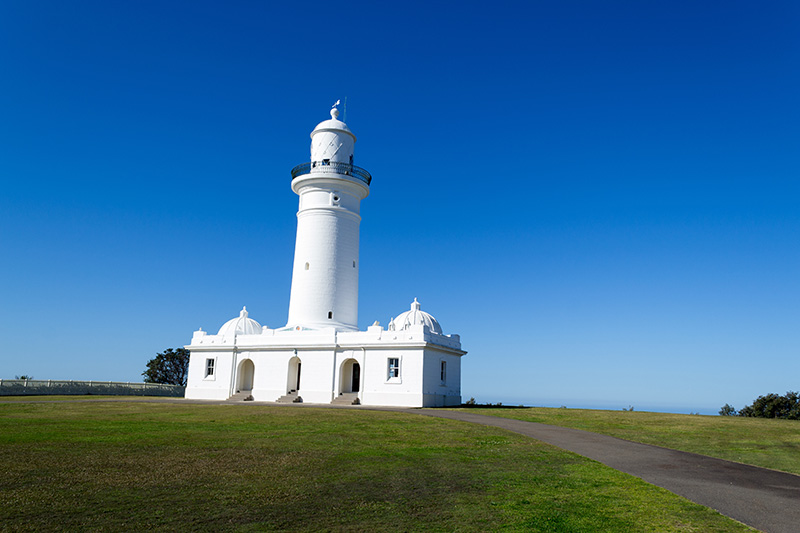 Australia’s oldest lighthouse can be found in a dominant location overlooking Port Jackson on South Head, Sydney. Its construction in 1816 at the end of the Napoleonic Wars was spurred by an influx of convicts to the New South Wales colony and it served both as signalling station and guardian for inbound ships. The lighthouse’s designer, British-born Francis Greenway, was a convicted forger who had proven his worth to the governor, Lachlan Macquarie. The successful construction earned Macquarie a permanent mark on the navigation chart and Greenway a partial pardon.

Macquarie’s light initially used whale oil lamps and mirrors, which gave it a range of nearly 19nm. The only drawback was its location, high up on South Head and more than 1nm from the harbour entrance, which could make it ineffective in poor visibility.

The original lighthouse’s soft sandstone tower was crumbling 50 years on, so a more robust structure was commissioned in 1883. It mimicked Greenway’s design but could house a larger fresnel lens light.

In the 1970s, Macquarie Lighthouse was automated but continues to operate today, protected by the Sydney Harbour Federation Trust and available to visit.

One of several lighthouses in Iceland to bear a brilliant yellow colour scheme, the semi-circular Húsavík Lighthouse was built in 1956 to guide boats through the narrow waters of Skjálfandaflói Bay to the small town of Húsavík.

Given its northern latitude, Húsavík Lighthouse spends the winter in near perpetual darkness, hence the importance of this and more than 120 other lighthouses located around Iceland’s coastline.

In addition to its navigation duties, the lighthouse is a popular destination for visitors wishing to view the aurora borealis or observe passing mink, humpback, and blue and killer whales. 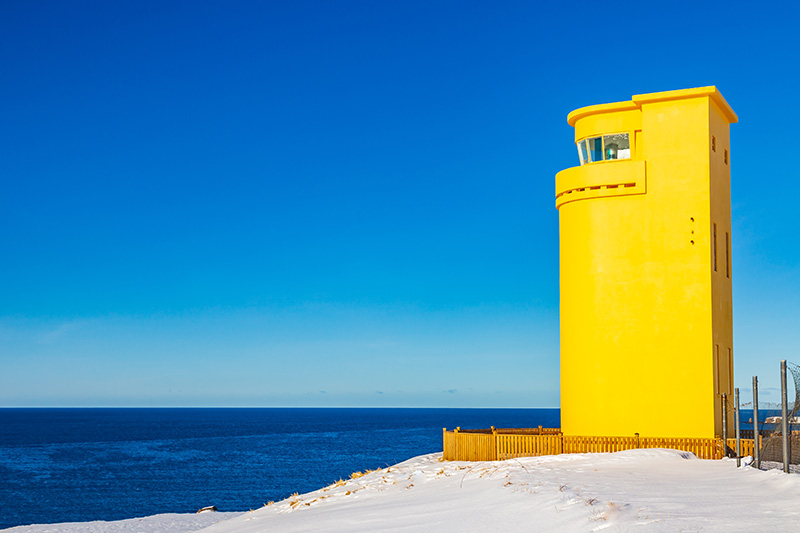 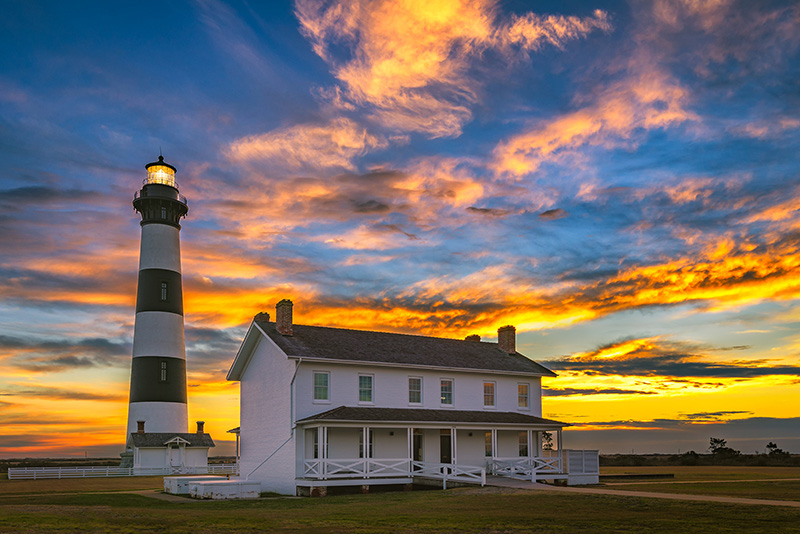 Standing 48m tall, Bodie Island Lighthouse on the Outer Banks of North Carolina is one of the few remaining tall, brick tower lighthouses in the United States. It’s third time lucky with this structure as the first Bodie Island Lighthouse had an unsupported brick foundation and soon started to lean in the mid 1850s. American Civil War combatants blew up its replacement in 1861.

The current Bodie Island Lighthouse took shape in the 1870s on a new 15-acre site. Early issues included geese crashing into the lens and lightning strikes, but it continues to serve today despite significant damage inflicted by Hurricane Irene. With the lighthouse long since automated, the former keepers’ quarters now provide a home for Cape Hatteras National Seashore’s Ranger Office and Visitor Center.

No tour around iconic lighthouses would be complete without taking in the dramatic coastline of Brittany in France and its rugged granite towers that experience the full fury of Atlantic gales. All the more remarkable then that the world’s tallest lighthouse is in this region, on Île Vierge, an islet off the northwest Brittany coast that marks the southwestern limit of the English Channel.

Dating to the beginning of the 20th Century, the 82m Île Vierge lighthouse takes 397 steps to climb between the entrance steps and the lamp room. Far from a gloomy ascent, climbers find themselves surrounded by a circular wall lined with white opal tiles (see header image), which serve as a protection against humidity and dust. Those fit enough to attempt it can visit by boat and step upwards to take in a most astonishing view in summer months.

This giant of all lighthouses is automated, with a range of 27nm. It is kept company by an earlier 33m high square tower, constructed in 1842, which lends a dramatic sense of scale. 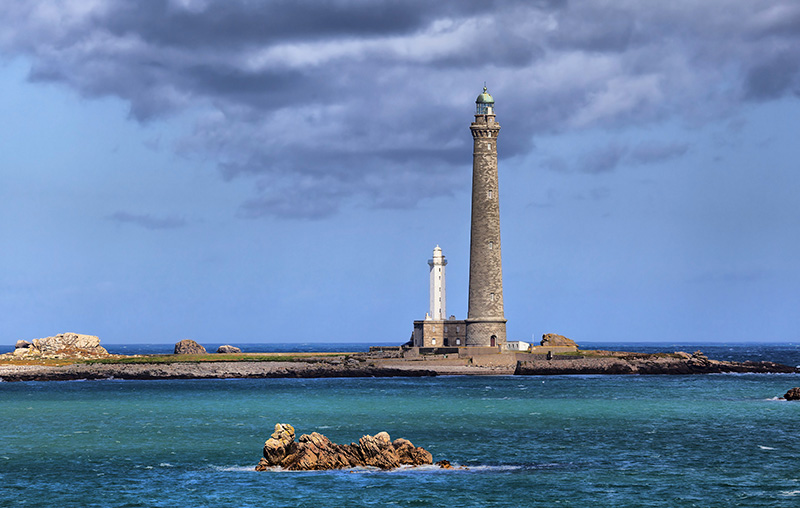