Oceans and lakes have generated countless legends ever since humankind found a way of breaking free from the boundaries of land.

Some claims of strange sights and happenings remain a mystery to this day, but there are many extraordinary real experiences that owe their existence to the incredible nature of the world around us. Here are six very real examples where observers might be excused from rubbing their wide eyes in disbelief.

You may be familiar with the idea of mirages in the desert, but did you realise the atmosphere can play tricks with what we observe at sea? Ships hovering in mid-air, fat, thin, distorted and duplicated vessels or even ghostly ships sailing inverted are all possible thanks to Fata Morgana or 'superior mirages'.

The condition necessary for this phenomenon is a thermal inversion where cooler air at the sea surface sits beneath a band of warmer air. Light is bent upwards as it passes through those air layers of different temperatures. See this excellent example of a Fata Morgana hovering yacht here.

Flying ships are a popular feature for local news and social media but be aware not all the images you see are genuine cases of the still relatively rare superior mirage. Look closely, and often you'll see the ship is firmly immersed in a much lighter patch of sea, further away from the viewer. A false horizon occurs at the point where nearby water in shadow meets the sun-blanched sea in the distance, leaving any vessel near the actual horizon hovering like the legendary Flying Dutchman of old.

LED underwater lighting is a big thing in boating now, providing a vivid halo of light around the hull. However, nature is more than capable of putting on breathtaking visual displays of her own, thanks to bioluminescent organisms that use chemical reactions to generate vivid blue light and other colours.

Various types of bacteria, algae, jellyfish, worms, crustaceans, sea stars, fish, and sharks can all turn into living glow sticks. They luminesce for different reasons that include defence, communication and camouflage.

The effect can be seen by boat owners in many parts of the world when bioluminescent marine plankton are present in the water at night. They cast an eerie glow in a boat wake, lighting up a surf line or exploding with stroking patterns around the stroke of a paddle. It's a genuinely ethereal experience to jump in and swim among millions of microscopic stars, but note it's wise to check first. Aside from the need for care when swimming at night, toxic algae blooms can also luminesce, so best seek local advice before taking the plunge. 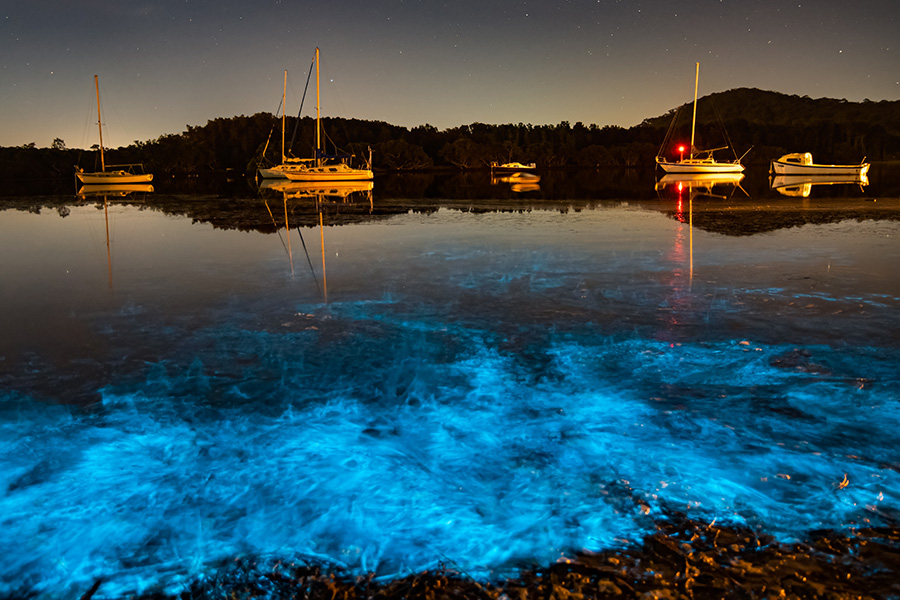 A related phenomenon is 'milky seas' or 'mareel', where vast areas of sea glow in a way visible at a distance and even from satellites. The cause is likely to be bioluminescent bacteria or algae appropriately called sea sparkle. These large areas of bioluminescence are sensed as a milky white hue because the rods in our eyes that handle night vision do not perceive colour. In reality, the clouds of light are blue or occasionally observed as green.

Rogue or killer waves used to be the stuff of legend, feared by many mariners, blamed for unexplained ship disappearances but not believed by the scientific community. That was until the advent of marine sensor buoys in the 20th Century when the phenomenon was proven.

A wave turns rogue when it is twice the height or more than expected for a given sea state. Typical causes include constructive interference between differing ocean swells passing across each other and the dynamic joining of opposing waves in storm conditions.

The biggest rogues exceed 20m (66ft) in height and can challenge any vessel. In 2020 a 30m (98ft) monster was recorded 200nm west of Ireland, generated by the tail end of Hurricane Epsilon. The transatlantic liner, Queen Elizabeth 2, was famously hit by a similarly sized wall of water on the Grand Banks off Newfoundland while negotiating 120mph winds generated by Hurricane Luis. Her master, Captain Ronald Warwick, said it "looked as though the ship was headed for the white cliffs of Dover". Despite sustaining damage and curling her bow deck plates upwards, the QE2 made New York safely. Other ships have been less lucky.

So what does that mean for the average leisure boater? Only the most daring might find themselves in the combination of location and conditions where rogue wave events are likely unless they take to a cruise liner.

It is possible to meet a rogue wave anywhere in open water with stormy meteorological conditions in the region. Hot spots include Cape Horn, Cape of Good Hope, the Bermuda Triangle and the North Sea. However, it's equally possible to spend a lifetime at sea and never encounter one. Try telling that to George Clooney, bending the throttles of his fishing vessel one last time in that most eye-watering of seafaring movies – The Perfect Storm. 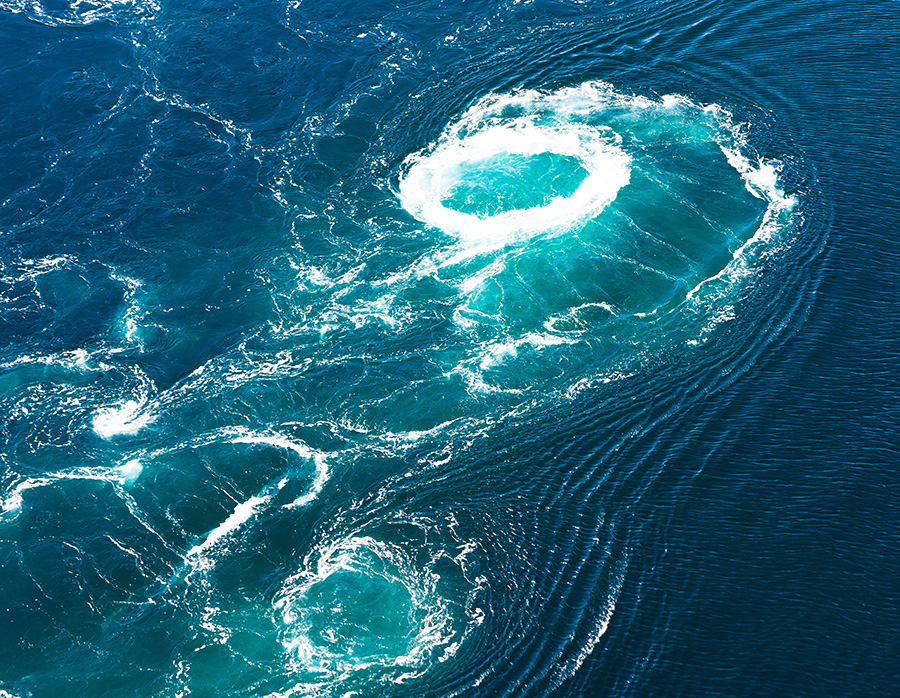 Whirlpools are an everyday occurrence – you see them when you drain the water from your bath or sink. At sea, they are less common and an entirely different thing to behold, created by fast-flowing tides, opposing currents and underwater obstructions.

Take one of the most infamous – the narrow Gulf of Corryvreckan between the Scottish west coast islands of Jura and Scarba. More than eight knots of flood tide gush across a deep underwater trench and steep rock pinnacle to create whirlpools and other disturbances that are daunting in a flat calm and dangerous in any wind. When the Gulf is in its most benign mood, it can be playful, as one owner of a 36ft motor cruiser, assisted by a local pilot, reported: "After three or four attempts, we found a good whirlpool that grabbed hold of the boat's stern gear as if a rope was attached. It pirouetted our boat in steady circles while the tide gave us a speed over the ground of over four knots with the engines out of gear."

There are plenty of other significant whirlpools worldwide, or maelstroms as the strongest may be known. Norway lays claim to the most prominent – Saltstraumen, near Bodø (pictured) and Moskstraumen in the Lotofen Islands. Skookumchuck Narrows in British Columbia, Old Sow in New Brunswick and the Naruto Strait are all similarly daunting. They all share a common feature of compressing fast-flowing waters through narrow channels. It's much less likely you'll see significant whirlpools in open water, although you may spot miniature whirls and swirls anywhere two conflicting currents meet or where the seabed steeply rises. 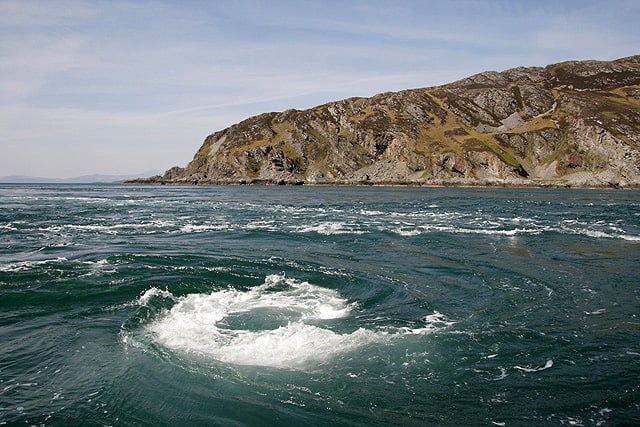 Waterspouts are another ocean phenomena that have generated legends and created much fear in mariners since ancient times. They can occur anywhere, at sea or on lakes, but are most prevalent in tropical waters and areas with high incidences of storms.

Tornadic waterspouts are the most feared. They are similar to a land tornado but form downwards over water and are associated with severe storms, with a side dish of lightning, hail and high winds. They can move quite quickly.

Fair weather waterspouts start life as a dark spot on the water and form upwards towards developing cumulus clouds. They are usually of shorter duration, and by the time the water column is visible, they are reaching maturity and may not last much longer. They also barely move.

A waterspout may be between 50m–100m (163ft-325ft) in diameter and generate winds of at least 50mph or even double that, so they are best given a wide berth. If you spot a waterspout forming, steer directly away from it in any safe direction. Despite the amount of water vapour in the column, waterspouts are hard to spot on the radar. Weather services will warn in areas where they are prevalent if they think the conditions are likely to generate them.

Team Great Britain on the Clipper Round the World Yacht Race experienced a knock-down at the hands of a nearly invisible waterspout off Australia in 2014. Crew member Paul Hardy explained: "We'd had several squalls during the day and saw another one coming in; we thought it was going to be a normal squall and started to put a reef in…all of a sudden, out of nowhere, the wind and noise started to rise."

Paul realised something was wrong when he landed in the water with the mast above him: "It was all over in 60 seconds, down and then back up again. The boat turned totally on its side. It made us aware the ocean is always the boss."

Fog can be a strange experience at the best of times, but the sea can dish up peculiar varieties of its own to spook the most hardened boater.

Take tsunami fog, so called because its onrushing wall of moisture is easily mistaken for a tidal wave. The only danger comes from the sudden restriction of visibility and perhaps an understandable increase in heart rate. Like most fog, it occurs when warmer moist air blows across cooler water. To see a particularly striking example on Lake Michigan, check out this account of tsunami fog on the BBC.

On the other hand, sea smoke is most likely when frigid air lightly blows across warmer water. It makes the surface steam, generating wispy strands of surface-level fog that can become more intense. The effect is most likely in waters towards the poles like the Barents Sea where this image was taken but it is possible anywhere if the conditions are right.