Is this the most useful, yet least known function?

When conditions have deteriorated, or maybe it’s just got dark and you’re faced with crossing a busy shipping lane it’s a big advantage and a relief to have radar to guide you through the issues ahead. 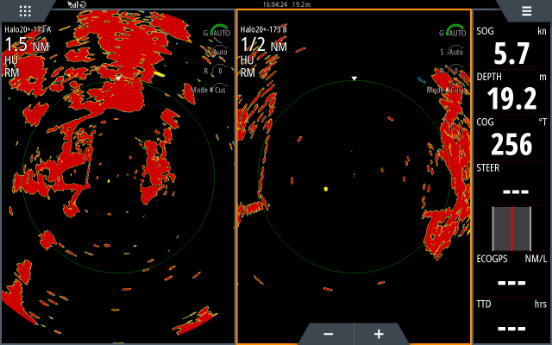 When conditions have deteriorated, or maybe it’s just got dark and you’re faced with crossing a busy shipping lane it’s a big advantage and a relief to have radar to guide you through the issues ahead.

From anticipating whether you are on a collision course with a ship, or identifying and tracking the torrential downpour that is marking a threatening looking squall, the ability to locate and avoid man made and natural obstacles reduces stress levels. But just as if you were judging the same with your eyes alone, the ability to see the target in detail while still being able to assess the overall issue on a bigger scale is what really counts.

‘If I take this much avoiding action now, where does that place me in the long run?’

Or in other words, using one screen for navigating while the other is set up for piloting at close quarters.

On the face of it, to achieve such a broad and detailed impression at the same time requires two separate radars, yet the Simrad® Dual Range function allows you to achieve this with just one. And while other manufacturers will boast similar capabilities there is a big difference - our radars use a unique, patented system that not only produces two distinct range views from one unit, but do so without compromising the signal and image that it produces.

A valuable feature that is often overlooked.

“One of the most common questions that we get from Simrad® owners is that while they love their radar, they would be even happier if they could see more than one range at a time,” explains Simrad® product director Laurie Bates. “The good news is that they can, they just didn’t know it.

“In a way it’s probably one of our least known, but most useful functions. Dual Range is a standard feature on our Halo® 20+ and Halo 24 units. We describe it as two virtual radars inside the dome which allows you to see and monitor targets from 50m to 48 nautical miles away on the Halo 24 and up to 36nm on the 20+.”

“The patented technology that allows our units to do this is pretty special. To understand why, first of all think of a dual frequency transducer under the boat which operates on say 50kHz and 200kHz. With this you’d have a split screen with one frequency reading out on one side of the screen alongside the second display showing the other frequency.

“Behind the scenes the signal that is being sent is switching from one frequency to the other and listening for the responses alternately. The 50 kHz signal, which is your deep water frequency, fires but the transducer won’t send the 200kHz signal until it has heard back from the 50kHz one. So during this time the shallow water has been ignored”

“The process is called interleaving and it is how our competitors do dual range radars. As they send one signal, they stop sending and listening out for the other. Whilst it’s transmitting and receiving and processing a pulse that is optimised for short range, it’s ignoring the long range and vice versa.”

“The way our dual range works is that we don’t transmit two separate pulses for the short and the long range. Instead, we transmit both at the same time but in a multi-frequency burst. For underwater sonar it’s call CHIRP (Compressed High-Intensity Radiated Pulse). These are longer pulses that include a range of frequencies that start at a low frequency before then moving to a higher frequency within the duration of the pulse.”

Transmitting a blend of short through to long CHIRPs gets both excellent minimum range (about 6m - 20ft) and high performance target detection (similar to a 6kW radar) at all ranges.

Halo uses 5 different CHIRPs to put maximum energy on target at any given range. Each CHIRP covers sub-range of the full radar range. For example:

Each pulse / CHIRP covers up to the blind range of the next longer CHIRP and so on.

“Our Dual Range system works in a similar fashion as it sends out a range of frequencies in a single CHIRP but then focuses on the range that you’ve selected for each individual window on your display. As a result, our radars don’t have the interleaving problem of ignoring the short range while they try to process long range.

“This means that there is no degradation of the short range performance while thinking about long range which maintains the high resolution for both ranges.”

Navico product expert Craig McMillan reinforces this and emphasises the key advantages of the Simrad® system.

“The bottom line is that our dual range doesn’t slow down the painting of the image,” he says. “As a result we have faster updates, which results in better situational awareness. This contrasts sharply with our competitors who drop the refresh rate to half as their systems paint one range before then painting the other. The Simrad® Dual Range system paints both at the same time, so there is no compromise”

When it comes to using this function, it is a simple matter of dragging and dropping what you want from the menu page onto the display screen and then selecting the ranges that you’re interested in. It is as simple as that. And as Laurie Bates goes on to explain, ease of use and the philosophy behind the scenes is another area that differentiates Simrad® from the competition.

“When we design our units and create features such as Dual Range, our philosophy is that we don’t want to artificially lock down the rest of the controls on the radar,” continues Laurie. “Instead, we want to ensure that users still have access to tuning the radar or changing other parameters, even though they’ve selected a particular feature or mode.

“For example, our VelocityTrack™ feature allows the user to select whether they want to highlight all moving targets or only those ones that are approaching. Alternatively they can turn the feature off. Another example would be the ability to set the speed threshold at which moving targets start to colour up.

“And while this might sound obvious, this is not commonplace in the radar world.”

So, from the most useful function that is most commonly overlooked, to the detail behind the scenes that is invisible to all but the designers and techies, understanding what’s under the skin of a Simrad® radar goes a long way to understanding how to get the best of your system.