Jason Ehrlich talks about identifying the fish species showing up on your Simrad sounder. 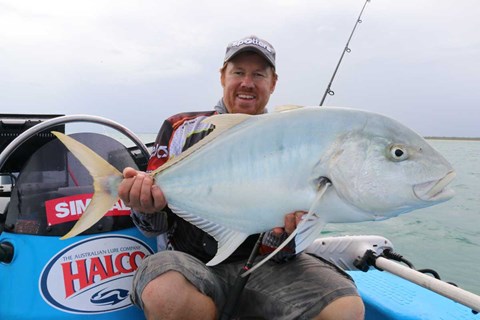 Today’s sounders are flashy bits of gear but rarely do we use them to their full potential.

There are heaps of information out there on setting them up. But what if we could take things one step further and learn what fish we are seeing and make an educated decision on the species type before even placing a line in the water?

I study my images hard and even take a few screenshots to go over later and work out how different species show in various ways. The advantage of this is you can then specifically target the fish you are seeing with the correct method once you think you have identified them.

Barra are one of the easiest fish to distinguish. They show great barra-shaped shadows on side image and down image also produces barra shaped returns. Not all fish are this easy though so let’s break down some screen shots and work out what the fish are.

Fast moving fish like longtail tuna roam the ocean freely but will still show up well on the sounder because they are often swimming in big schools. On this screenshot, we approached a moving school of fish, found right of the boat. The boat was moving at around 10km/h and the fish returns on side image are quite long meaning the fish stayed in the beam longer while travelling the same direction as the boat. No guess as to where the next cast was to intercept them.

Tuna show much like Spanish mackerel on the sounder (a squiggly line on side image or raw sonar). Notice the lone solid return on the left of the boat. This is most likely a shark hanging around the school of tuna.

When the boat is stationary or moving slowly, sharks being such big fish show up well. The shadows they cast on side image often have the pointed fins in the shadow of the return. When they sit directly below the boat and show up on down image, it is almost scary.

When fishing structure, individual returns are often schooling fish. This shot shows a school of smaller trevally sitting above a rocky outcrop. The return on the left about to leave the raw sonar screen could almost be mistaken as bait but the down image tells the true story. The cluttered raw sonar return is broken down into several individual blotches meaning sizable fish. Moving at speed over these fish made it hard to predict the species but a lure over the side of the boat to pinpoint the school soon revealed they were 1-3kg golden trevally. The GPS screen can be used to return to isolated features like this.

Golden trevally and other big pelagic fish are often found in the more open water away from reef and structure. If you can locate bait schools you are in with a good chance. The bait in this shot are packed tightly together but there is no sign of any predators. Searching nearby soon revealed a mass of big golden trevally.

The big goldens can be seen on all splits in this shot. Solid returns on raw sonar means they are big fish. The down image tells a similar story. On side image, we can see the shadows are quite solid. Some of the more side on fish have a shadow which is rounded in shape while the others at various angles are irregular in shape but still quite solid. These fish were all over our vibes as soon as we started hopping them. I’m pretty sure this find produced a triple hookup.

Queenfish are an impressive looking fish out of the water. On the side, they look huge but their body is actually very thin. This makes them show a little differently to the thickset trevally. On side image, they appear very similar. Their big side profile throws a nice shadow behind the return. Down image and normal sonar is where we can predict they are likely queenfish. Looking down over their thin top profile, the returns are much weaker.

In an ocean full of different types of fish, you are never going to predict what species fish are all the time. The sounder along with an understanding of fish habits can certainly help take the guesswork out of it. To know when to use a soft plastic, metal jig, vibe or other lure style and how to present it will certainly help boost your catch rate. Keep this in mind and study your catches and the way they display on the sounder. The smallest of differences can prove the biggest clues. Buckled rods!